Despite being directly involved in criminal activity, Wack 100 claimed Tekashi shouldn’t be labeled a snitch.

21 Savage has been very outspoken when it comes to how Tekashi 6ix9ine is still being embraced by certain sections of Hip Hop culture. For example, the “Snitches & Rats” rhymer got into a heated argument with Wack 100 over his association with 6ix9ine.

21 Savage was a recent guest on Gillie Da Kid and Wallo267’s Million Dollaz Worth of Game podcast. The topic of Wack 100’s connection to Tekashi came up during the 83-minute episode.

Gillie Da Kid used the 21 Savage interview to share his thoughts on Wack 100 seemingly backing 6ix9ine. Specifically, Gillie had a problem with the internet troll-turned-rapper, who testified against his Nine Trey Gangsters affiliates in federal court, being referred to as someone not directly associated with criminal activity.

6ix9ine admitted on the stand that he ordered a $20,000 hit on Chief Keef. The Chicago-bred rapper was shot at outside Times Square’s W Hotel in June 2018.

Tekashi reportedly reduced Kintea “Kooda B” McKenzie’s payment from $20,000 to $10,000 because Chief Keef was not harmed in the shooting. Kooda B was later sentenced to 4.5 years in prison for his involvement as a hitman.

Since his arrival on the mainstream music scene in 2017, Tekashi 6ix9ine has feuded with numerous artists such as Chief Keef, YG, The Game, Lil Durk, Meek Mill, Casanova, G Herbo, Ludacris, Trippie Redd, Vic Mensa, and more. Many rappers have shunned the 25-year-old TattleTales album creator, but Wack 100 chose to align himself with 6ix9ine.

Wack 100, an alleged Piru Bloods gang member, caught heat for sitting down with 6ix9ine on Akademiks’ YouTube channel. The Game and Blueface’s manager even defended Tekashi being a government witness against the Nine Trey Gangster Bloods. Wack 100 is quoted saying on Clubhouse, “I don’t think 6ix9ine, being who he is… I tell people all the time, civilians cannot be labeled snitches.” 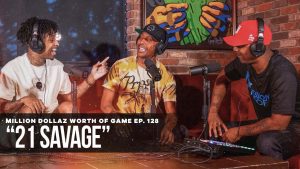