Kevin Michael Brophy filed a lawsuit in 2017 alleging that Cardi copied his back tattoo and used it on the cover of her mixtape “Gangsta B#### Music Vol 1.”
According to Brophy, the mixtape’s vulgar cover, which shows Cardi sipping a 40-ounce beer while being pampered by a man in the backseat of an SUV, humiliated and embarrassed him.

Finally, this summer, when Cardi B completes her demanding work schedule, a judge and jury will sort out the whole affair. Cardi has a long list of business commitments, including a film, live concerts, and an upcoming European tour.

The battle with Brophy will begin on July 18th with a pre-trial meeting, SugarWaterRadio can confirm exclusively. The trial will eventually begin at 8:30 a.m. on Tuesday, August 2nd, 2022.

After at least seven reschedulings, Judge Cormac J. Carney told both sides that he would not be reschedule the trial this time.
Judge Carney reminded both sides, “The Court recognizes that Ms. Almanzar wishes to give her complete concentration to rehearsing for her European tour for the entire month of August.” “However, she will have to schedule a very brief four-day trial at the start of that time.” The Court will not continue the trial date unless there are exceptional circumstances, and counsel are strongly discouraged from obtaining another continuance.” 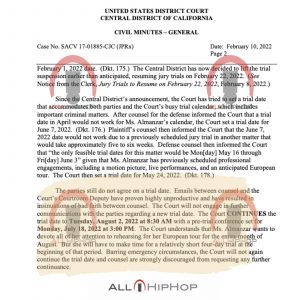 Even though she has fought hard to put countless matters to rest, Cardi B’s legal difficulties will continue once her trial with Kevin Michael Brophy Jr. concludes.
Cardi B settled a dispute with her former record label and manager, Klenord “Shaft” Raphael, for an estimated $10 million in December 2020. And, after Tasha K. was awarded a stunning $4 million in damages in their high-profile defamation claim, her legal team spanked her. Cardi B, on the other hand, is still dealing with a few legal troubles.
For a furious argument with Tekashi 6ix9ine’s girlfriend, Jade, and her sister “Baddie G,” she is still facing a lawsuit and potentially jail time.

She’s also still embroiled in a legal battle with a fan who went too close to her following the Met Gala in May of 2018.
Offset, Cardi’s husband, pounded him, but he is suing Cardi, Offset, and Versace, the event’s organizer.