50 Cent and Michael K. Williams had a difference of opinion regarding some street s###. But, even in death, 50 had something to say.

The world mourns the sudden death of Michael K. Williams, 50 Cent goes decidedly against the grain. The Instagram post has since been deleted, 50 Cent reminded us that he had a beef with Michael K Williams. 50 didn’t like him because Michael said Jimmy Henchmen was unjustly jailed. The streets say Henchmen had 50’s homie killed trying to get to him. It is deep, y’all. 🤷🏾‍♂️

The removal took it a step because 50 used the death of the actor to promote his show, “Raising Kanan.” All opportunities are not good opportunities! He decided to dedicate the Instagram post to highlighting the similarities between Michael K Williams’ death and the newest episode of his show.

Now, Fif did take it down, but then he put up another post. He eventually took that down too. Both were n terrible take and the take down confirms this.

The earliest reports stated that the actor died due to an unfortunate drug overdose. And it was the captions that really caused people to fire back at 50 in the comments.

Michael K. Williams has been open about his past drug use with cocaine, but the most recent report suggests that he died of a heroin overdose. There’s been no evidence that he used fentanyl at all. There may have been some slipped in there though. CLICK ON PIC FOR VIDEO 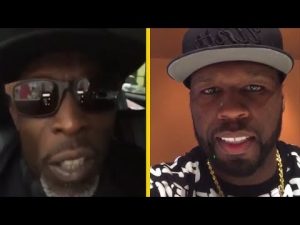